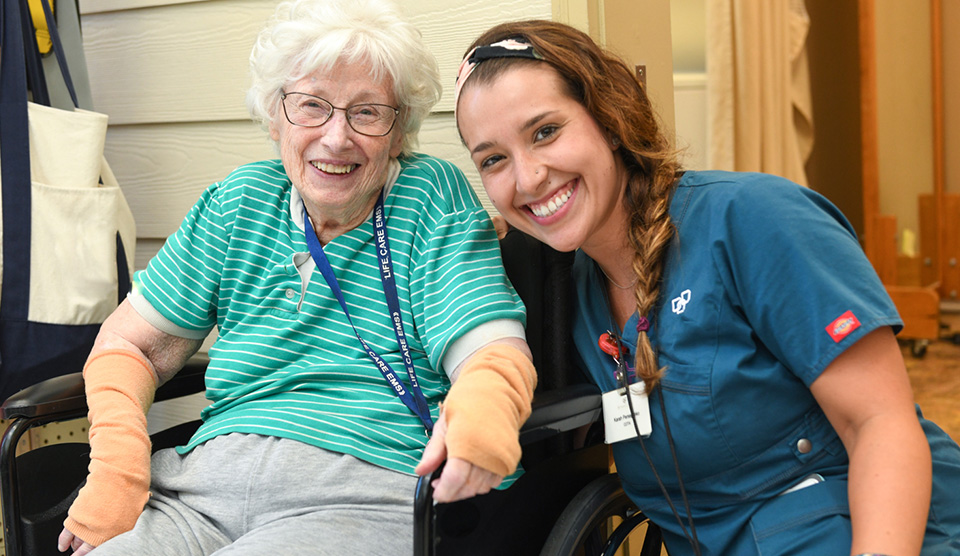 Details of Experience:
“Coming to Lebanon Center was a game-changer for me. Being here changed everything! My transformation didn’t happen overnight. I have been a resident here for quite some time. Initially, the plan was for me to heal and then go back to my group home. About two months into my rehabilitation stay, it dawned on me that I had entered something phenomenal; that is when I decided to stay long term. As I watched other patients come in, get therapy, start walking again and discharge, I realized I had two options; to sit around in my wheelchair being upset or I could believe in myself the way the team believed in me. I was motivated by their compassion and encouragement. They went out of their way to make me believe in myself again.,” said Donald M.

On sunny afternoons Donald enjoyed retiring to his deck in the afternoons to get some fresh air. On a seemingly ordinary mid-week afternoon, Donald was looking up at the sky daydreaming. A few moments passed, and as he went to turn around, he realized he had lost his balance and ended up going to Tri-Star Summit Hospital for treatment. The doctor at the emergency room could tell that the strains, caused by Donald’s fall, accompanied by the progression of his Parkinson’s, that he would have trouble transferring himself to and from his wheelchair. The hospital recommended to Donald and his siblings that the rehabilitation would help him feel more confident in his abilities to manage his disease. After speaking to several people in the community, Donald’s sister found the friends she had spoken with had nothing but glowing reviews about Lebanon Center and chose it as the rehabilitation location best fit for Donald.

Donald came to Lebanon Center on June 28th. Donald had been managing his Parkinson’s for several years along with COPD and Pleural Effusion. Upon admission to Lebanon Center, Donald experienced slight confusion, as to why he got admitted. Donald assumed his siblings would support him in his efforts to go back home, as he felt he could tolerate the pain in his lower back. Donald felt very helpless and alone, but things turned around quickly.

Early the following morning, after Donald met several staff members, he was more optimistic that it was the right decision. Of those staff members, one physical therapist made all the difference. Katie Hilker walked him through the next steps, and Donald understood, at that moment, that while he felt no one believed in him, it was the exact opposite. Donald stated, “It was that next day that changed my entire outlook of the situation. While I felt that this was diminishing my independence, I quickly have seen that this was more of a stepping stone to get where I wanted to be.”

The following weeks were crucial in Donald’s road to rehabilitation. Katie helped Donald stand up right away; however, Donald was standing steadily for a single minute and could only take three steps. Donald shared that as soon as he stood up, he started experiencing extreme loss and fear. Donald realized just how strenuous normal daily activities had become for him. While he was eager to regain his strength, he also felt a great deal of defeat. Donald started believing he would not be able to walk on his own again, successfully. Donald regained his strength, but the loss never left him. After being discharged from therapy, after recovering from the strains caused by the falls, Donald chose to stay at Lebanon Center rather than releasing home.

Covid-19 has impacted everyone in one way or another, but in Donald’s eyes, it gave him a new sense of hope. After getting a shower, Donald was sitting in his doorway, waiting for a bingo card, and witnessed an amputee walking. Had he been doing his regular pre-COVID routine, he would be in the common area rather than in his doorway. After seeing the patient who was an amputee, Donald had the biggest smile on his face. Katie had passed by him in the hallway, and at that moment, she asked him what had made his day so bright. His response astonished her. Donald decided, at that moment, he wanted to walk again! After being confined to transferring to and from his wheelchair for years, he was ready.

Donald had therapy before, but he never felt this level of motivation or hope. Upon initial therapy admission, he required total assistance with moving and transferring. He needed help with all tasks, even basic ones. This time Donald and his therapists shared similar goals of being able to walk and regain independence. His therapists began with in-bed exercises, moving on to activities sitting up, and then finally to walking exercises. He worked to strengthen his arms and excellent motor skills, which were weak because of his diagnosis’. Each week, Donald was progressing to the next level toward his goal.

While Donald is still working towards achieving his goals, we want to celebrate his successes. In roughly two months, Donald can stand for over six minutes and walk 350 feet. The feats he has already accomplished are substantial. When I asked Donald, what changed his mind about his experience and therapy, he said, “The entire team. They treat me like family. Seeing everyone excited and cheering me on gives me confidence that I haven’t had since I was younger. I know I am not in this alone.”

We wish Donald nothing but success and happiness in his future goals and believe that his gumption and determination will continue to lead him to accomplish all of his goals!